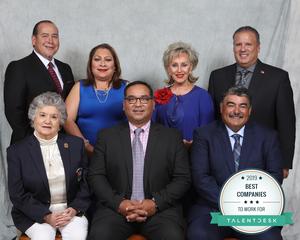 EDINBURG – The Edinburg Consolidated Independent School District recently announced that it has been named as a top employer in the TalentDesk’s list of 2019 Best Companies to Work For in Texas.

According to TalentDesk, a job board offering extensive resources for jobseekers, Edinburg CISD has earned several high rankings, which include:

“We are honored to be highlighted as a top five employer in the state,” said ECISD Interim Superintendent Gilberto Garza Jr. “We attribute much of this success to our hard-working Board of Trustees, who help us to reach our goal of developing and retaining highly qualified staff by offering competitive salaries and great benefit packages.”

Edinburg CISD is the leading employer in Hidalgo County with approximately 4,800 team members.

In August, the Edinburg CISD Board of Trustees approved a $371 million budget for the 2019-2020 school year, raising salaries by as much as 6% for teachers, counselors, librarians and nurses. Additionally, administrative employees received a 3.5% pay increase from their midpoint salary and full-time hourly employees received a raise of $1.00 per hour, which ranged from a 3.5% to 8% pay increase.

The rankings cover thousands of job titles and locations. Multiple sources of quality were taken into consideration when determining TalentDesk’s proprietary company scores, including Glassdoor and the Better Business Bureau.

Company scores reflect high levels of employee satisfaction in the workplace, including factors such as work-life balance and compensation. Out of over 22,000 companies evaluated, about 8,000 made the cut.

To view the Edinburg CISD top rankings, click on the links listed below: