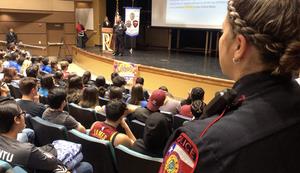 “We just want everybody to know, especially Edinburg CISD, that these vaping products are harmful for you,” said ECISD Police Chief Ricardo Perez Jr. “They are dangerous and there’s already 42 confirmed deaths in the United States, and 118 plus that are ill. We don’t want any of our students to be sick.”

Approximately 700 senior students at Vela High School listened closely as Perez talked to them about the health risks of using e-cigarettes, also known as “vaping.”

“I’m very grateful that they came here and that they spent time talking to us students, because that’s where the root of the issue starts,” Vela High School student Adam Castaneda. “As the police chief was saying, ‘We are the future generations and the caretakers.’ I’m glad that they informed us, so we know how to take care of them and how to address it for future generations.”

“I did not know any of the facts that they just showed and it is so important,” Vela High School student Jayda Hernandez said. “I can’t even imagine all the students who are doing this that don’t even know what they are doing and how the consequences that can affect them not only right now with the law, but in the future.”

According to the Centers for Disease Control and Prevention, the use of e-cigarettes is unsafe for kids, teens, and young adults, since most contain nicotine. Nicotine is highly addictive and can harm adolescent brain development, which continues into the early to mid-20s.

“The brain works by taking in information and processing. If it’s not all there, because of these chemicals that are now affecting it, you really end up with a lot of problems,” said ECISD Health Services Director Diana Davila.

The electronic smoking devices come in many shapes and sizes, resembling cigarettes, cigars, pipes and everyday items, such as pens.

E-cigarettes work by heating a liquid to produce an aerosol that users inhale into their lungs. The liquid can contain nicotine, and other substances and additives, including tetrahydrocannabinol (THC) oils. THC is the psychoactive mind-altering compound of marijuana that produces the “high.”

Perez said that his officers have done a real good job of identifying and recovering these vaping devices.

The ECISD Police Department uses a test kit, which is approved by the government.

“It’s what they call Sirchie (Marijuana) Test Kits. You just put a little drop in the bag and you break canisters in there that release the chemical that will prove the test,” Perez said. “If it is THC oil, it will turn like a purple color. Light purple means it’s not too strong. Deep purple means it’s a very strong content of THC oil.”

Perez said that he hopes the awareness campaign sends a strong message to students about the dangers of vaping.

“The last thing you want is to be sick with illness in your lungs or something that can affect your mind,” he said. “That’s the message that we want to send out. That’s there’s consequences not only legally, but physically and mentally.”

A message Perez said that he hopes these students will spread to others.

In December, the Edinburg CISD Police Department is scheduled to take its Dangers of Vaping Awareness campaign to other high school and middle school campuses.