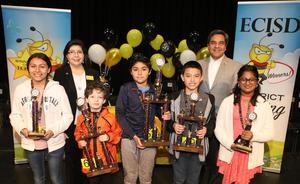 After a grueling five-hour competition and 17 rounds of spelling words, five students emerged as the champions of the Edinburg CISD 27th Annual District Spelling Bee 2020.

“I’m excited to compete in the Regional Bee,” said Lorenzo Garcia, who earned first place. “On the way here, I practiced with my mom. My coach would teach me in the library on Mondays and Tuesdays.”

The top five students who will be representing Edinburg CISD at the Regional Spelling Bee competition include:

“At first, what we did was my mom said the words and I spelled it and if I got I right she highlighted it,” said Caleb. “But then, we were running out of time and she said we couldn’t get through that many words like that. So, we just started looking at them.”

“Last year, I got seventh place,” said Roel. “Mostly, I’m going to practice with my brother and my mom really and sometimes my sister.”

The champion of the regional competition will win an all-expense paid trip to compete in the 2020 Scripps National Spelling Bee held in Washington, D.C. this summer.