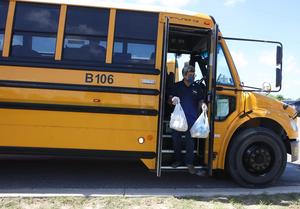 “We are putting all our departments’ efforts together – teamwork effort,” said ECISD Interim Superintendent Gilbert Garza Jr. “It is teamwork that continues to drive our school district to be champions, and it is teamwork that will carry us onward during this challenging time.”

Currently, the District is serving over 32,500 students at 43 campuses. It employs more than 200 bus drivers and bus monitors that cover a 945-square mile area of Hidalgo County, which is similar in size to the state of Rhode Island.

“We do recognize that there are some students in our District that don’t have the ability to have what they need at home so that learning opportunities can be equal to all. That is our mission, our goal, and so we have involved everybody,” said ECISD School Board Vice-President Carmen Gonzalez.

The transportation staff will be helping with several programs, such as providing Wi-Fi services in rural areas, delivering meals to students, distributing school supplies and technology equipment, picking up and dropping off homework assignments, and locating students who have not reported back for the 2020-2021 school year.

“Every morning when we get to school, the principal or the teachers give us workbooks, and they give us assignments to go drop off to the students at their houses,” said ECISD Bus Monitor Abraham Salinas. “We also go and ask the parents to see what they need. We make sure that the students are connecting with their teacher.”

“Books, hotspots, anything that we need to take back to the houses,” said ECISD Bus Driver Renato Martinez. “We’re going house by house, looking for the addresses and we are locating the mother or the parents of the kids.”

On September 7, Edinburg CISD expanded its successful Curbside Meal Pickup Program, which has provided approximately 2.5 million healthy meals to children in the community since the program began in March.

As part of the expansion, the bus drivers are delivering school breakfast and lunch meals to children in designated communities. This new service has increased the student meal distribution by approximately 10,000 meals to a total of more than 35,000 meals a day.

“What a great job we’re doing together as a Board, and as a school district to provide these opportunities for our boys and girls,” said ECISD Board Member Dominga “Minga” Vela. “It’s a big united effort. We’ve always said, ‘Together we can do anything.’”

“We are delivering these needs to these children, especially when they’re stuck at home,” said ECISD Board Member Miguel “Mike” Farias. “They need all of the help that they can get, and it’s encouraging to see the District going out there. It doesn’t matter where you live, who you are, you’re going to be serviced if you come to ECISD.”